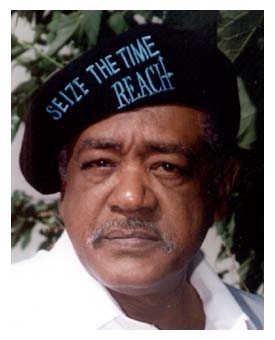 
BOBBY SEALE, THE 1960s ACTIVIST AND VETERAN of the new left student protest era, was born in Dallas, Texas. He was raised by his carpenter father and Christian mother, and has been cooking and barbequing since he was twelve years old.
A man of many talents and skills, Bobby Seale has also been a stand-up comedian, actor, and jazz drummer. He learned carpentry at age five and grew up working in his father's building and furniture business in Oakland, California. During his four years enlistment in the U.S. Air Force, he was trained and worked as an aircraft sheet metal fabricator mechanic. Returning to Oakland in the early 1960's, Bobby Seale worked in the aerospace industry at night and during the day attended Merrit College as an engineering design major. With the advent of the Civil Rights Movement, he changed to the social sciences, influenced by Martin Luther King, Jr. And Malcolm X.
He co-founded the Black Panther Party (now defunct) in October 1966. During his eight years as chairman of the Black Panther Party, Bobby Seale was the key national co-ordinator/organizer, initiating community-based service programs such as breakfasts for school children, free busing for senior citizens, (SAFE-Senior Against a Fearful Environment), preventative medical health care, co-operative housing, people's free food programs, and many others along with mass voter registration drives.
His international notoriety evolved most prominently during the 1969-70 Great Chicago Conspiracy Trial, depicted in the HBO T. V. docudrama written and directed by Jeremy Kagan, Conspiracy: The Trial of the Chicago Eight. Throughout all of his political trials (which he won in the courtroom), and his involvement with community services and political electorial organizing, Bobby Seale has kept barbequing.

Return to Barbeque'n With Bobby Seale